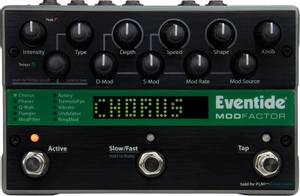 All the standards - Chorus, Flanger, Phaser as well as Rotary, Tremolo, and Vibrato are there. Also included is the unique Undulator effect from the H8000 and a RingMod that lands somewhere between ring modulation and synthesis. The dedicated SLOW/FAST footswitch for ramping the LFO rate comes in handy. LFO rates can also sync to Tap Tempo and MIDI clock

Through the decades, top players have depended on Eventide: Jimmy Page, Frank Zappa, Brian May, Eddie Van Halen, Steve Vai, Robert Fripp, John Petrucci, and Adrian Belew, to name a few. Now, for the first time these effects are portable AND affordable. Stompbox simple, ModFactor fits on your pedalboard or in your gigbag.

Studio Quality Effects at Your Feet

Top recording studios worldwide use Eventide effects on hit after hit. ModFactor includes Eventide's best modulation effects from the past 36 years without compromising quality OR flexibility.

Plug-and-play expression pedal control of wet/dry mix or any combination of parameters. Control program changes and vary parameters continuously via MIDI. Supports instrument or line level inputs and outputs. Plays well with others; adapts seamlessly with a wide variety of amps and other foot pedals.

Obsolescence is so 20th Century

Easy to upgrade; download new software from the Internet and install via USB.