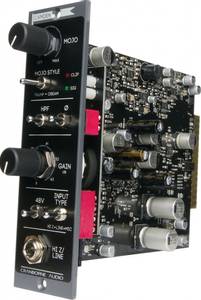 Put simply, Camden 500 is the most astoundingly clean, linear, and transparent preamp you’ve ever heard.

The Very Best Of Both Worlds

Camden 500 is the most astoundingly clean, linear, transparent preamp you’ve ever heard. But it also has “Mojo” - 2 discrete custom analogue saturation circuits that can be applied, exaggerated, and perhaps best of all - bypassed. 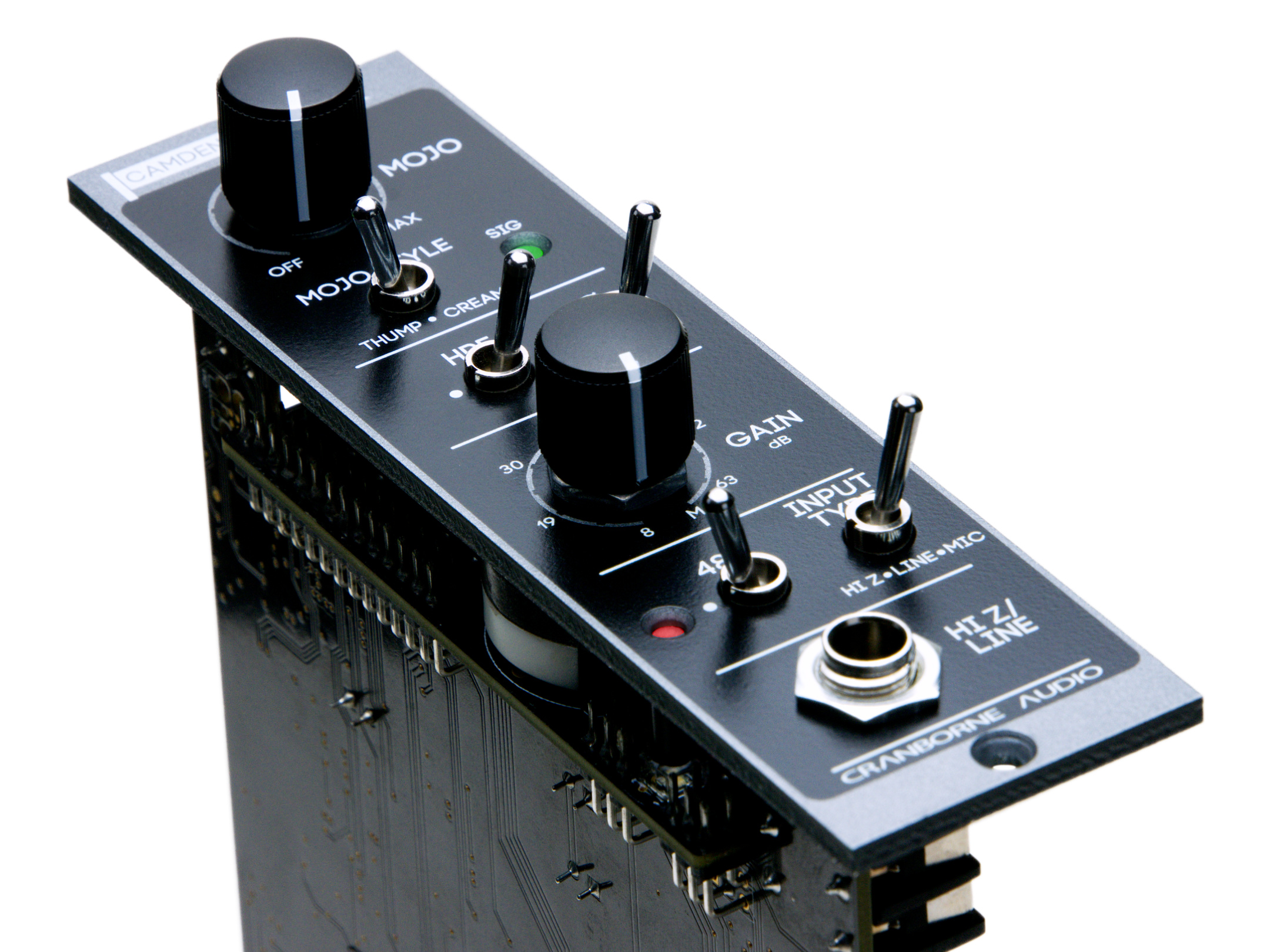 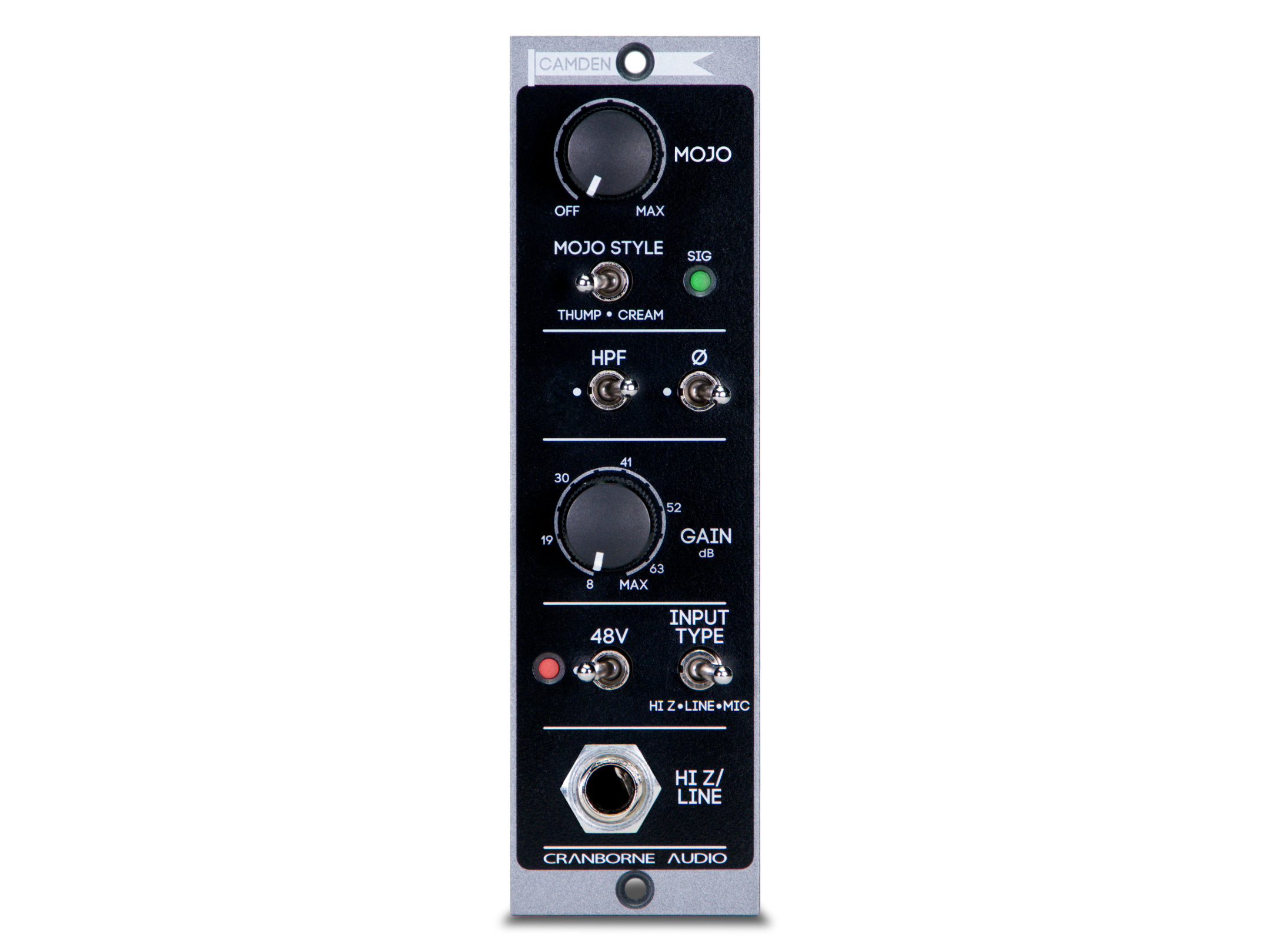 Camden 500 provides the utmost clarity and detail when it is most required. Its custom 'Camden' topology achieves stunning low-noise and low-distortion performance: -129.8dB EIN (150ohm, unweighted) and THD+N as low as 0.0002%.  It also sets a new standard for frequency and phase linearity: ±0.7dB frequency response from 5Hz to 200kHz at max gain and <2° phase shift @ 50Hz – 20kHz. The sum result is the most natural sounding preamp you've ever heard.

Camden 500 features "Mojo" - a custom analogue saturation circuit that transforms Camden 500 into the fattest, warmest, most colourful mic preamp in your arsenal. Designed to introduce harmonics and saturation effects that our favourite vintage gear produces, Mojo can be subtle, it can be exaggerated, but best of all it can be bypassed... 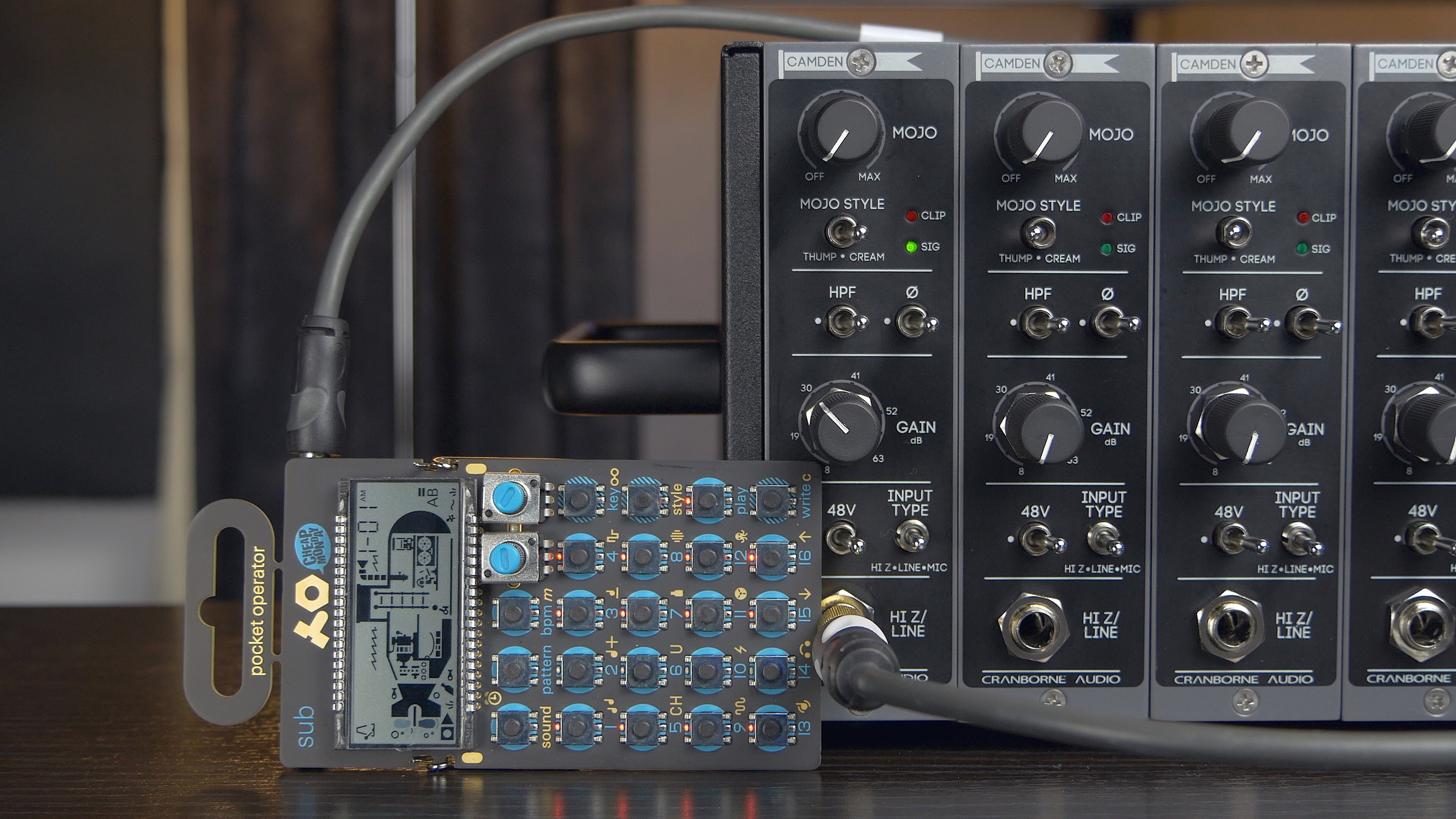 Designed from the ground up by our director of engineering, Edward Holmes, Camden 500 was created to be the ultimate recording front-end for the modern studios and withstand the rigours of modern workflow and production techniques. Designed to excel with any input source, Camden 500 features a completely original, custom-designed preamp topology that achieves stunning low-noise and low-distortion performance and frequency/phase linearity at any gain setting from unity to 68.5dB.

Stepped Gain Control
Camden 500 features a premium, 12-way switch gain control that applies up to 68.5dB of clean, transparent preamp gain in 5.5dB steps. This makes it easy to recall gain settings and easy to match the gain of two Camden 500's for stereo applications.

Stereo Matched
With carefully selected modern components, any two Camden preamps are completely stereo matched to within 0.1dB. Every Camden preamp also passes through a rigorous frequency response test at the factory that ensures it performs the same as the last.

Progressive-slope High Pass Filter
Camden's high pass filter features a progressive slope where low end is rolled off initially at around 6dB/octave and then increases to 12dB for the lowest octave - preserving the low end you want, and cutting what you don't. 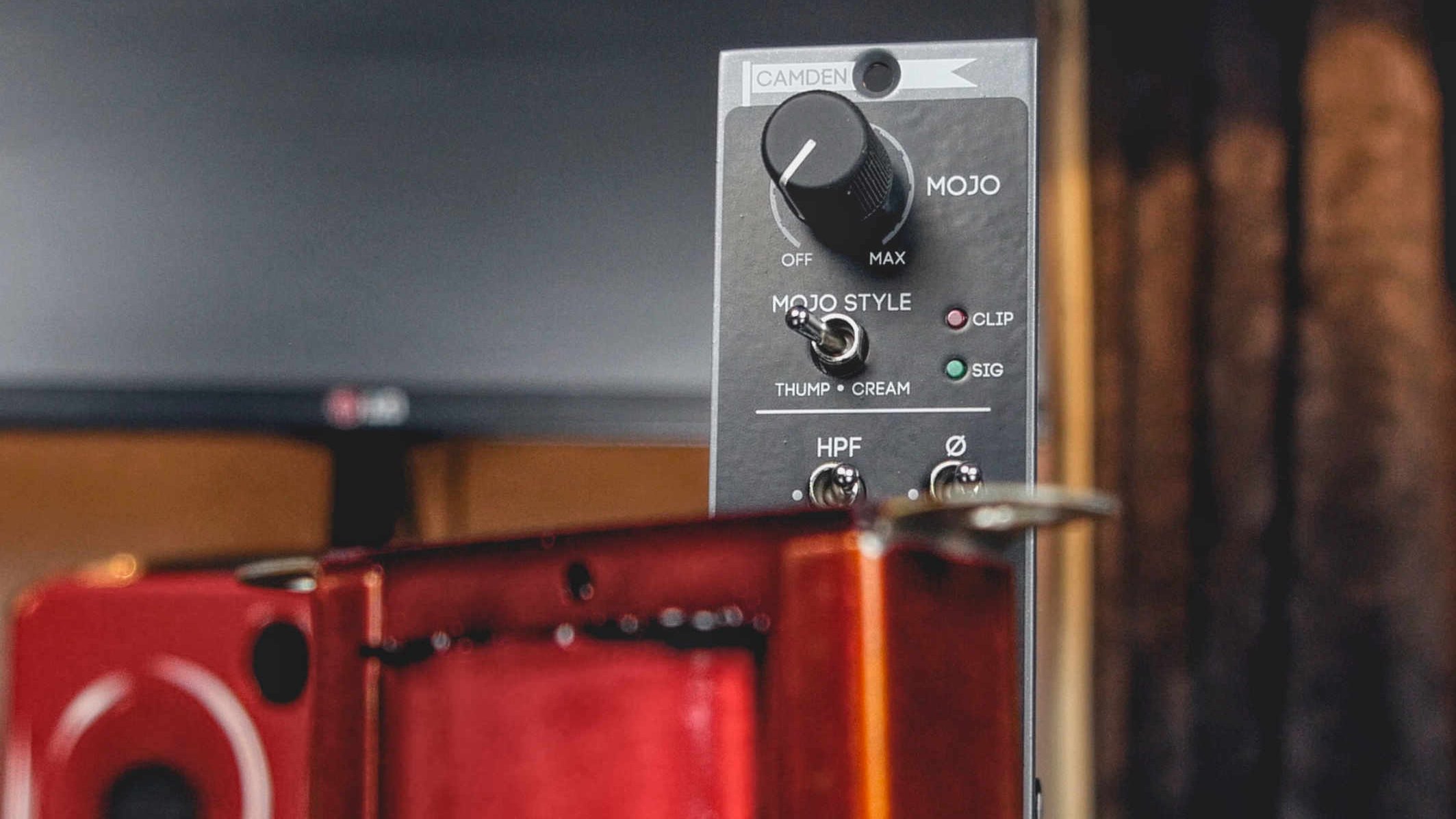 For moments when you want that gooey, vintage vibe on your recordings, we developed Mojo - our own custom analogue saturation circuit that adds the familiar tone of transformers, valves, and vintage equipment onto your Camden's preamps for recording or mixing. Record through Mojo to add that vibe on the way into your DAW, or add the Mojo during the mix phase - Mojo adds tons of analogue saturation to all audio signals.

Thump excites low-end content by adding harmonics to the signal in the 20Hz - 100Hz range - resulting in fuller low-end on smaller speakers. As Thump is not EQ-based, the additional harmonic content is shaped by the source and it’s existing low-end frequency content resulting in a natural addition of extra “Thump”. 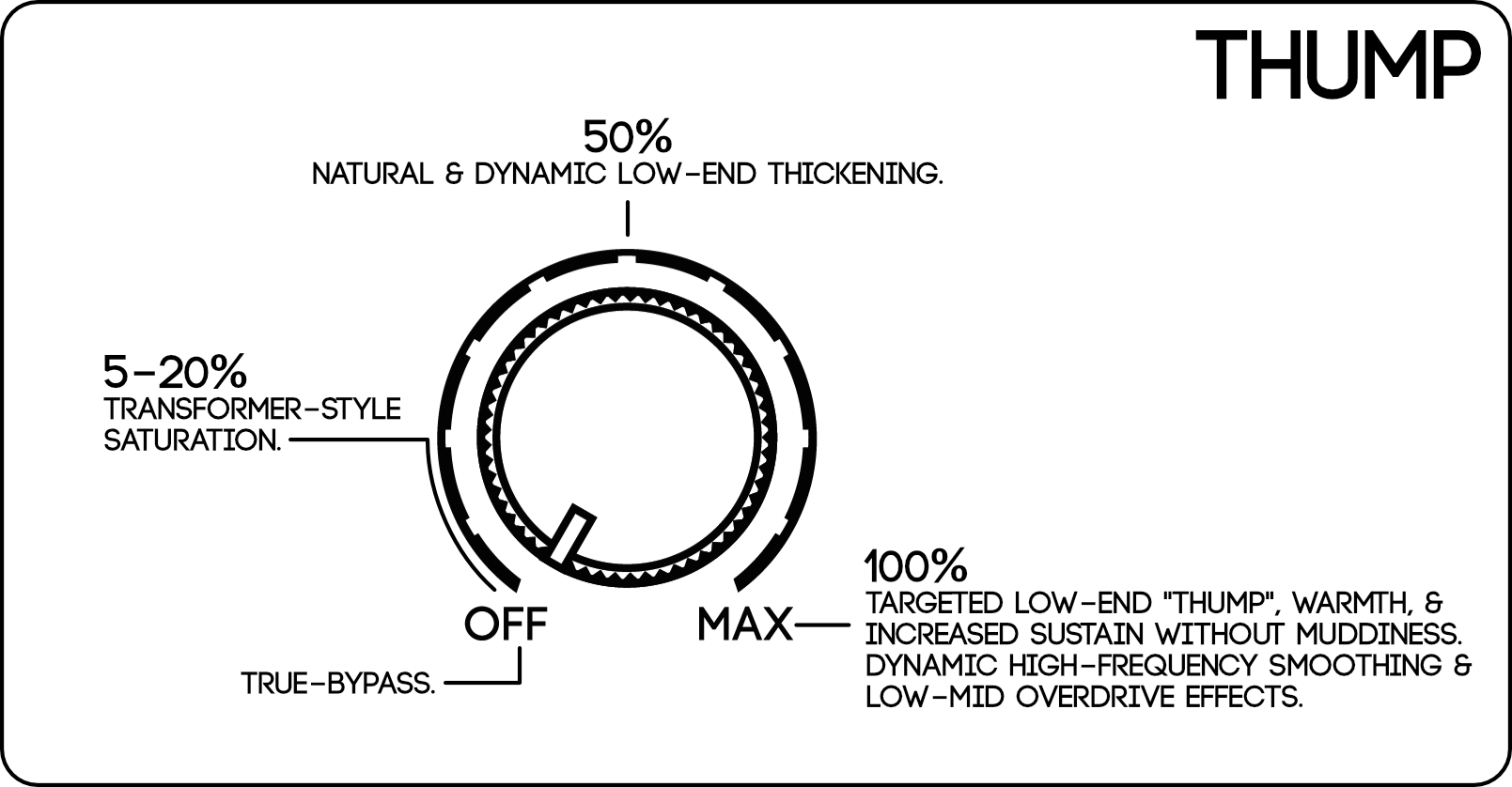 Cream introduces a vintage smoothness and edge that is similar to how valves and tubes impact the sound of a preamp. Cream drastically increases harmonics and dynamically smooths-out the low mids for increased HF emphasis. Like Thump, Cream is completely dynamic and will vary its effect based on the inputs level and source material.

Unlike transformer or valve preamps, Mojo is variable and can be dialled in to taste. Transformer and valves are integral parts of certain preamp designs and so cannot be removed from the signal path or altered for different effects. Mojo on the other hand can be dialed-in to taste or crucially, bypassed when you need a clean and pristine recording.

Transformers and valves sound great, but they have a flavour that can't be removed. The Phase Shift, Noise, and THD added by these designs give them their sound, but that sound sometimes isn't always suited to a particular source. Camden gives you 3 discrete tonal flavours that allow it to excel on any source or instrument.