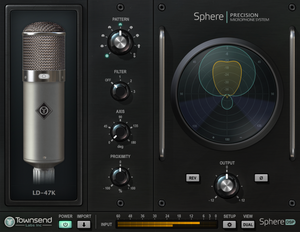 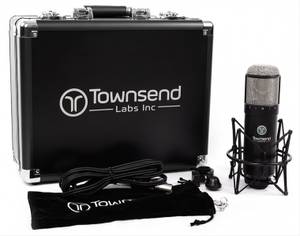 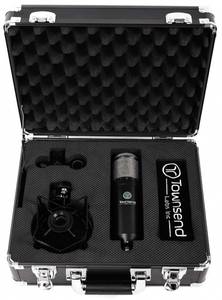 The Sphere L22™ microphone system from Townsend Labs models the characteristics of the most sought-after large-diaphragm condenser microphones with amazing accuracy, and allows selection of different mics and patterns even after tracking.

Sphere’s three-dimensional  approach captures the spatial nuances, proximity effect and off-axis frequency response of a wide range of microphones, which until now was not possible with any other product.

Because Sphere captures the three-dimensional response of target microphones, it precisely emulates the polar patterns and other off-axis characteristics of vintage microphones which are essential to their unique sound.

Listen to the LD-67 model with omni, cardioid, and figure-8 patterns:

The next clip is with the L22 microphone facing directly away from the guitar cabinet, while the pattern is adjusted from omni to figure-8.

Select mic type, polar pattern and other settings both before and after tracking.

No need to move a microphone solely because of too little or too much bass due to proximity effect. Great for punching in a vocal where distance from the mic varies from take to take.

Dual Mode in the Sphere plug-in makes possible phase-coherent mixing of multiple virtual mic models from the same physical microphone, before or after tracking. It's also possible to adjust the relative phase alignment of the two mics with the Align control.

Record In Stereo (With One Mic)

With just one Sphere L22 mic it’s possible to make coincident stereo recordings, and even have different mic models on the left and right channels, using the Sphere 180 plug-in.

This acoustic guitar track was recorded with one Sphere microphone and processed only using the Sphere 180 plug-in first with the LD-47 and then with the LD-12 mic model.

Virtually rotate the axis of the mic to give a more off-axis sound before or after tracking.

Create more accurate polar patterns to reduce bleed, room coloration, and susceptibility of feedback before or after tracking. For more information see the Off-Axis Correction chapter in the Sphere Hardware and Software User Guide.

The Sphere plug-in features a visually informative (and very cool) Polar Meter that dynamically displays the direction and level of sound being picked up by the microphone, as well as the currently selected polar pattern.

The microphone hardware has a self-noise level of 7dB-A SPL, well below most vintage microphones and comparable to many of the best modern microphones.

The L22 can handle in excess of 140dB SPL before clipping and is remarkably rugged. It won’t be damaged by high SPLs or air blasts as some vintage microphones can be.

All modeled product names are trademarks of their respective owners, which are in no way associated or affiliated with Townsend Labs Inc. These product names and descriptions are provided for the sole purpose of identifying the specific products that were studied during Sphere’s sound model development.